How the WA Legislature Killed the Golden Goose

From 1986 to 2016, the Washington State Public Works Trust Fund was a revolving account that was used by local governments such as cities and counties to fund more than $2.8 billion dollars in 2,000 public works projects at an extremely low interest rate of one to two percent. The agency is/ was self sustaining and cost effective. This agency was the closest thing Washington State had to a Public Bank or a Public Trust.

Sadly, from 2005 to the present, the Washington state legislature has repeatedly swept or diverted hundreds of millions of dollars from the Public Works Trust Fund. These hundreds of millions of dollars were basically used to pay for the so-called Boeing and Microsoft Tax Breaks. This transfer was therefore robbing funds from local governments to pay two wealthy international corporations. This transfer made it much more expensive for local governments to finance local public works projects. The removal of this funding for Public Works projects is certain to result in system failures all across our state which will harm public health and safety for years to come.

For the first 10 years, the Public Works Trust Fund had a stable source of funding from Real Estate Excise and Solid Waste Taxes of about $100 million per year. By 1995, this created a total fund balance of nearly one billion dollars for Public Works projects. While there were small withdrawals during the second 10 years, they were offset by increases in the Real Estate Excise and Solid Waste Taxes so that by 2005, there was more than $2 billion in the Public Works Trust Fund. Here is a graph of these first 20 years: 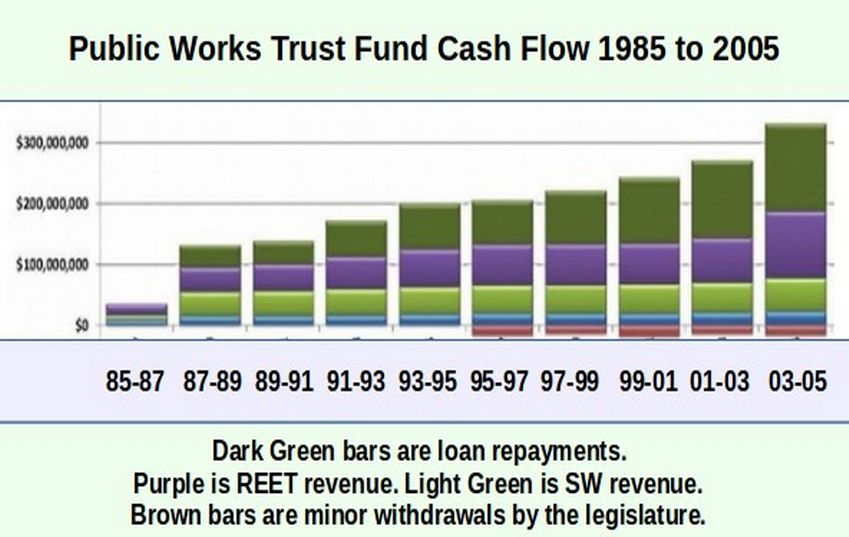 Here is a table of funds going in and out of the Trust Fund in the past 12 years in millions of dollars per biennium: 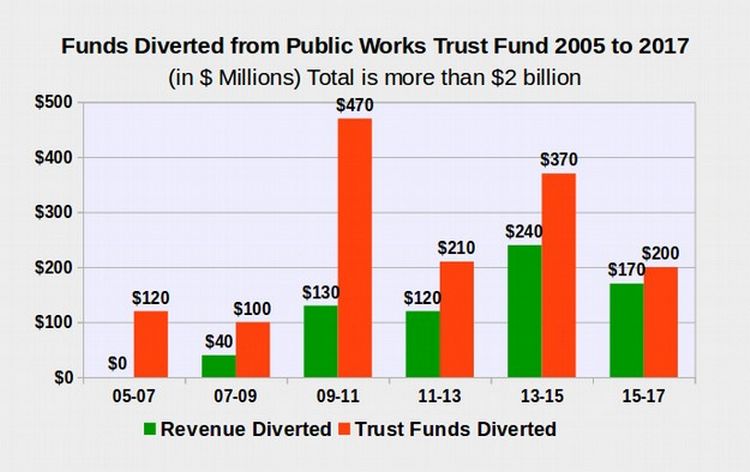 This is thus a very expensive shell game that only benefits Wall Street banks – at a huge cost to Washington State tax payers.

Here is a chart showing the history of Public Works requests per biennium and approvals per biennium. Note that only half of the requested projects have actually been funded. During the 2010-2011 biennium, no projects were funded because the entire account was “swept” by the legislature in order to balance the budget.
http://www.pwb.wa.gov/Documents/08-21-2015-PWB-Agenda-Packet.pdf 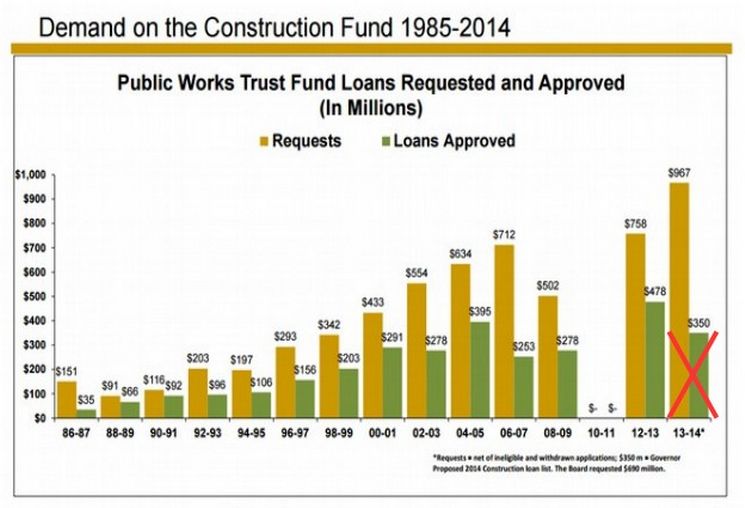 In the 2013-2014 biennium, there were $967 million in requested projects. Only $350 million were approved by the Public Works Board. $350 million may seem like a lot. But when you divide it by our state’s 7 million people, it is only $50 per person per biennium or $25 per person per year. More important, there is virtually no actual cost to tax payers because the Public Works Fund uses the payments from previous investments to fund new investments.

What does the future hold for the Public Works Trust Fund?
The 2016 legislature passed Senate Bill 5251 which moved the Drinking Water State Revolving Fund (DWSRF) from the Public Works Board to the Department of Health. This action required the Trust Fund to amend 800 existing contracts and resulted in the transfer of hundreds of millions of dollars in public works contracts to the Department of Health – which has never handled public works contracts in the past. According to the minutes of the July 2016 Public Works Board meeting, there was $285 million in revenue coming into the Public Works Trust Fund in the next two years. http://www.pwb.wa.gov/Documents/07-08-2016-PWB-AGENDA-PACKET.pdf

In 2016, the board proposed to use $10 million of this fund for their operating budget for the next two years ($5 million per year) and then loan out $254 million leaving an end fund balance of $29 million. However, the legislature swept the entire program, not fund any public works projects. Looking to the future, the loan repayments continue to drop each year until by 2026, the loan payments drop from the current $120 million per year to below $100 million per year. Thus, the total revenue available from 2017 to 2023 thanks to past Public Works loans was about $660 million. the interest rate from 1% to 6%.

2022 Update
The Public Works Board has been moved to the Department of Commerce and now has a new website: https://www.commerce.wa.gov/building-infrastructure/pwb-home-page/

There latest meeting was August 5, 2022. Here is a link to all of their most recent reports: https://deptofcommerce.app.box.com/v/2022PWBBoardMeetingAgendas

Here is a link to the 2022 Report to the Washington State legislature: https://deptofcommerce.app.box.com/v/2022PWBBoardMeetingAgendas/file/990441060809

As of August 2022, there was only $170 million left in outstanding loan repayments for the next biennium. The legislature has supposedly “Pinky Promised” to stop sweeping or diverting funds from the Public Works Trust Fund beginning in 2023.

Here is the annual loan repayment schedule for the next decade: 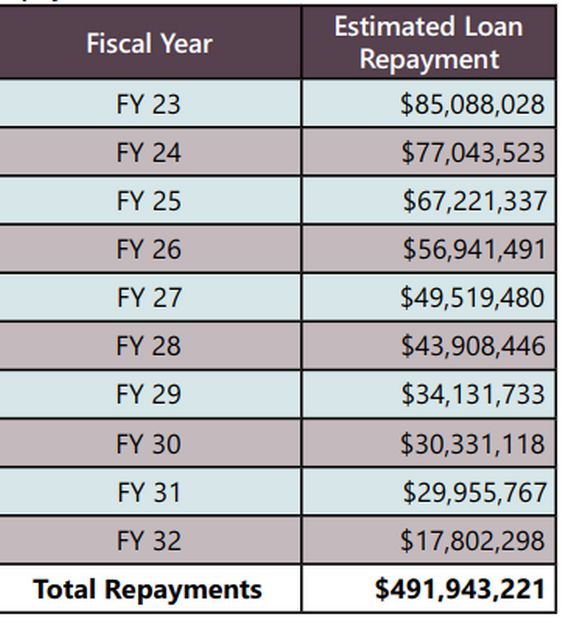 The dramatic decline in Loan Repayments is the direct result of the legislature’s diversion of public works funds during the past 15 years. Despite the legislature’s repeated promises to end these diversions, this important program is likely to end in the next few years – dramatically increasing the cost of local public works projects.

What is the solution to this problem?
One obvious solution would be creating a Washington State Public Bank. There have been bills in the legislature to create a public bank for the past 14 years. Sadly, the 2022 Washington state legislature once again refused to pass a Public Bank Bill – despite our state’s urgent need for job creation and housing creation programs. Due to the corrupting influence of Wall Street banks, it is possible that the legislature will never pass a public bank bill. It is also possible that in the next few years, the Public Works Trust Fund will go from meeting a tiny fraction of Public Works needs to going completely extinct.

We therefore need to consider other options that do not require legislative approval or public funding. One such option is the creation of a Non-profit Social Purpose Bank similar to that of the University of Washington. I will be writing more about this option in the coming months.

In the meantime, as always, I look forward to your questions and comments. Feel free to email me.