How Wells Fargo Operates… An Example of a Private For Profit Bank
In 49 out of 50 states, private banks enjoy a complete monopoly. The only state in the US with a public bank is the state of North Dakota. Wells Fargo has 20 branches in North Dakota. Nationwide, Wells Fargo has total deposits of $1.2 trillion, net equity (assets minus liabilities) of $159 billion and a net annual income (for the past four quarters) of $50 billion. Thus, Wells Fargo has a ‘return on equity of 30% per year.
http://www.usbanklocations.com/wells-fargo-bank.shtml 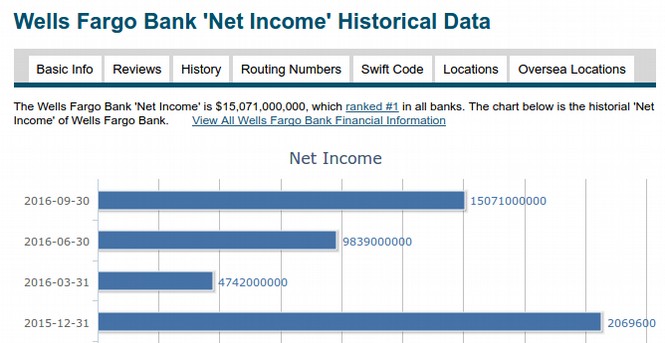 As of December 31, 2016, Wells Fargo had net loans of $934 billion. Thus, the “leverage” or loan to equity ratio is $934/159 or about six to one. Put another way, Wells Fargo has about 6 times more loans than it has equity. Many banks have ten times more loans than they have equity. This is called “Fractional Reserve Banking.” When a private commercial bank makes a loan, they do not actually loan out money from their own assets. Instead, they create both an asset and a liability on their balance sheet. Some call this generating money out of thin air. But it is really just a standard banking practice.
http://www.ibanknet.com/scripts/callreports/getbank.aspx?ibnid=usa_451965


How Private Wall Street Banks Really Make Money
Many people think that Wells Fargo and other private banks make money by charging more interest on their loans than they pay on their deposits. But this is not the case. There is not actually much difference between the interest they earn and the expenses they have. For example, if Wells Fargo charges an average of 5% interest on their $931 billion in loans (including everything from Home loans to Credit card loans) while they pay an average of 2% interest on their $1.2 trillion in deposits, they would make $46 billion on their loans but pay $24 billion on their deposits. However, Wells Fargo has about a one percent default rate or $10 billion. They also have to pay wages for thousands of employees ($32 billion), pay rent on 6,000 branches and pay for everything from advertising to electricity (amounts unknown). In fact, Wells Fargo made $40 million on loans, $9 billion on government bonds, and $4 billion in “other interest” for total interest income of $53 billion. Meanwhile, they paid out $6 billion in Interest expense, $32 billion in employee costs and an unknown amount for electricty, rent and advertising. When you add up all of these expenses, there is not much difference between interest in and expenses out. So where does Wells Fargo make $50 billion per year? http://data.cnbc.com/quotes/WFC/tab/7.2

Wells Fargo Buying Back Shares of their Own Stock
The real way Wells Fargo and other big banks currently make money is by buying back shares of their own stock – which naturally drives the price of their stock up. For example, in 2016, Wells Fargo bought back about $17 billion in shares. That represents 7% of their total shares. This buy back program paid off in a stock marlet price rise from $45 per share to $58 per share – an increase of 30%. The total market capitalization of Wells Fargo rose from about $250 billion to about $325 billion – for a profit of $75 billion in 2016.
http://247wallst.com/banking-finance/2016/01/27/wells-fargo-buyback-another-positive-move/ 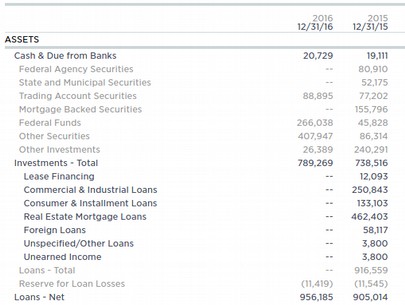 
Wells Fargo Billions of Dollars Price Rigging Fines
Wells Fargo has a long history of committing actual crimes in order to increase their profits. Since the 2008 crash, Wells Fargo has been involved in dozens of cases involving price rigging. Here is a year by year summary of just a few of these crimes.

2009: In November 2009 it had to agree to buy back $1.4 billion in auction-rate securities to settle allegations by the California attorney general of misleading investors.

2011: In July 2011 Wells Fargo agreed to pay $125 million to settle a lawsuit in which a group of pension funds accused it of misrepresenting the quality of pools of mortgage-related securities. That same month, the Federal Reserve announced an $85 million civil penalty against Wells Fargo for steering customers with good qualifications into costly subprime mortgage loans during the housing boom. In November 2011 Wells Fargo agreed to pay at least $37 million to settle a lawsuit accusing it of municipal bond bid rigging.

2012: Wells Fargo was one of five large banks that in February 2012 consented to a $25 billion settlement with the federal government and state attorneys general to resolve allegations of loan servicing and foreclosure abuses known as Robo-signing. The New York Attorney General later sued Wells Fargo for breaching the terms of that settlement. In July 2012 the U.S. Justice Department announced that Wells Fargo would pay $175 million to settle charges that it engaged in a pattern of discrimination against African-American and Hispanic borrowers in its mortgage lending from 2004 to 2009.

2013: In January 2013 Wells Fargo was one of ten major lenders that agreed to pay a total of $8.5 billion to resolve claims of foreclosure abuses. In October 2013 Freddie Mac announced that Wells Fargo would pay $869 million to repurchase home loans the bank had sold to the mortgage agency that did not conform to the latter's guidelines.

2016: In April 2016 the Justice Department announced that Wells Fargo would pay $1.2 billion to resolve allegations that the bank certified to the Department of Housing and Urban Development that certain residential home mortgage loans were eligible for FHA insurance when they were not, resulting in the government having to pay FHA insurance claims when some of those loans defaulted. In August 2016 the Consumer Financial Protection Bureau announced that Wells Fargo would pay a penalty of $3.6 million to resolve allegations that it engaged in illegal student loan servicing practices. In September 2016 the CFPB imposed a fine of $100 million against Wells Fargo in connection with the revelation that for years bank employees were creating large numbers of new accounts not requested by customers to generate illicit fees.

Wells Fargo Summary
It should be obvious from the above that Wells Fargo is far from the quiet community bank that makes money from the interest difference between loans and deposits. Instead, Wells Fargo makes money from gambling, stock market manipulation, fake accounts and price rigging. Perhaps this is why the City of Seattle recently voted to pull $3 billion out of Wells Fargo. Now that we have a better idea of how a private for-profit bank like Wells Fargo works, let’s look at the public Bank of North Dakota.


How the Bank of North Dakota Operates… Banking in the Public Interest
Unlike Wall Street banks, the public Bank of North Dakota is not listed on the Stock Exchange. Its only stock holders are the people of North Dakota. There are no stock buybacks to artificially inflate the share price. No gambling. No federal lawsuits. No fake accounts. No price rigging.


To better demonstrate the dramatic difference in size between the Bank of North Dakota and Wells Fargo, here is a graph of their loan portfolios: 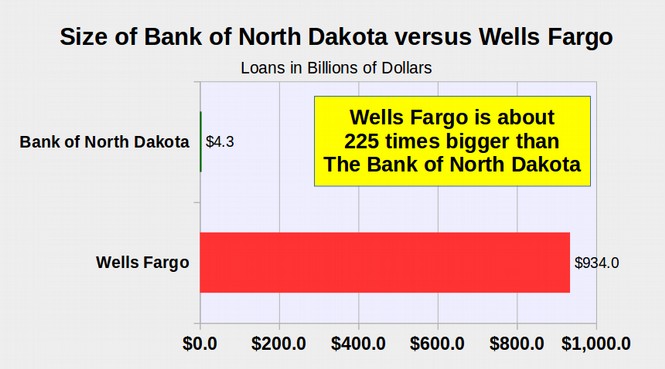 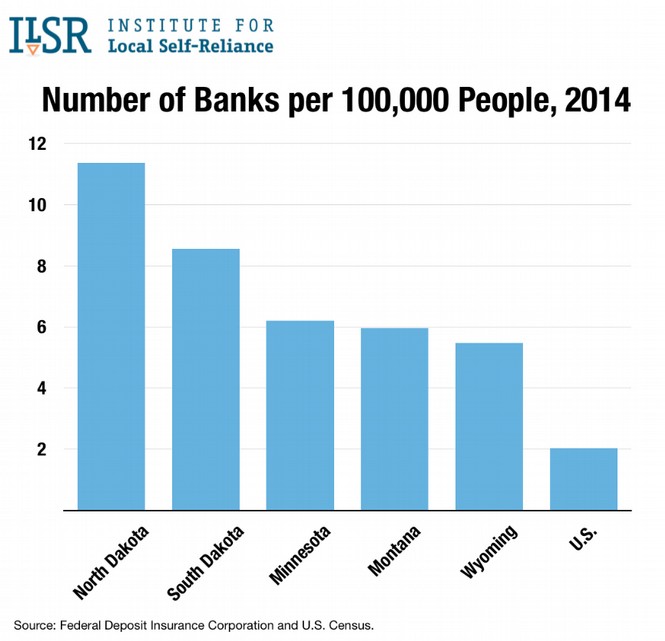 Here is a table of the above information:

Summary… It is Time for a Public Bank in Washington State
North Dakota invests twice as much per pupil in building schools while Washington pays twice as much in interest payments per pupil to Wall Street banks. Also while Wells Fargo has stopped buying state and municipal bonds – making it harder to finance public works projects – the public Bank of North Dakota has as one of its prime missions to finance state and municipal bonds at very low interest rates making it easier to finance public works projects.

Here is a table showing how a public bank is much different from a Wall Street Bank:

Rather than the fake claim that a public bank would harm Wall Street banks, what really happens when we place private corporate greed above the needs of our students is that our kids are harmed by being forced to attend schools that do not meet health code standards and our local tax payers are harmed by being forced to spend twice as much as they need to in order make the interest payments to Wall Street banks. It is time for our legislators to show they care more about our kids and our tax payers than about protecting the profits of Wall Street banks. It is time to create a public bank in Washington state similar to the public bank of North Dakota.